New Puppy on the Way

We got word from Ciara's breeder yesterday that Rica had her puppies yesterday (8/2/2022). She also had a litter of 5 - 2 males and 3 females. We're down on the list for one of the females, who will be ready to go home near the end of September. She'll be arranging visits so we can meet the pups in 5 weeks. Needless to say we're excited. 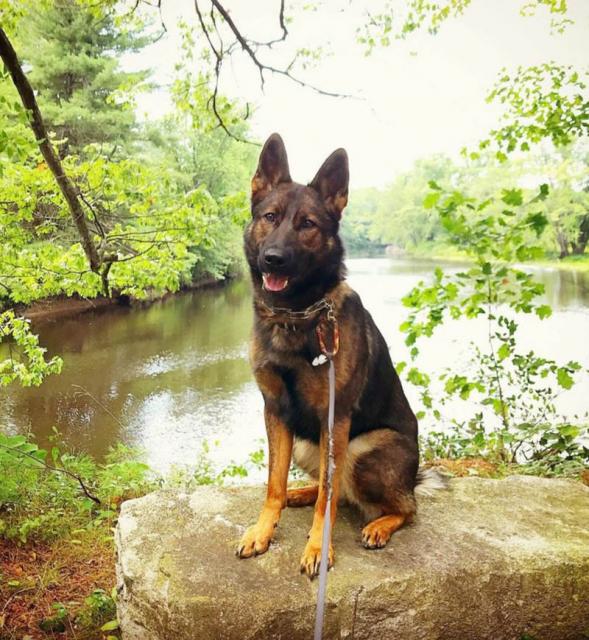 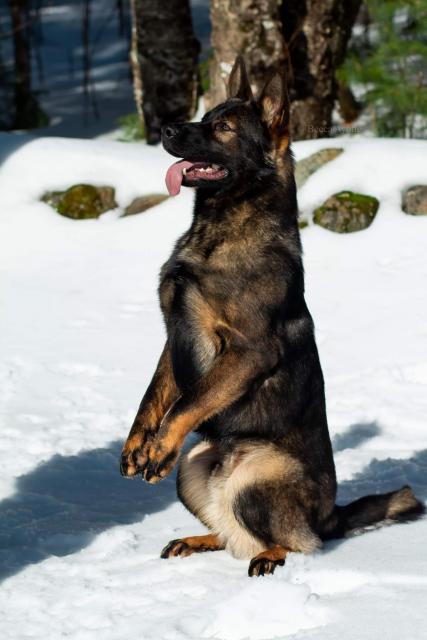 We'll have 3 red sable females in the running for us. It all seems really fitting as "Rica" was our top female when we first got Caleb, and Aodhán was a black and red who we lost on DH's birthday about 10 years ago. The new pup would be coming home right after his birthday.

My old gang is looking out for us.

Johanna, this is just what we all need right now-beautiful new life. Puppy pictures-hurray! Mostly, your family grows again

Please update when you visit the puppies.

Oh, Johanna I'm so very happy for you. The parents are just stunning

I can hardly wait for your 5 week visit.

I am so happy to hear this Johanna! What gorgeous parents, I can't wait to see your new girl. And hear about all of your adventures together!
Posted By: Zisso

It is always exciting to get a new puppy!

Don't know how I missed your initial post but a very happy and excited belated congrats! I agree with everyone, can't wait to hear the update from your five week visit.

For anyone who is interested, here's a youtube video of the litter at 2 weeks old. Just 3 more weeks and we get to meet them in person.

Oh be still my heart Johanna!!!!! They're ADORABLE! I can't wait for you to meet in person.
Posted By: Shilohsmom

What an active group at just 2 weeks of age. They are precious.

I can hardly wait until you get to meet them in person. Are they far away from you? I'm just so happy for you.
Posted By: Mary Jane

Originally Posted by Shilohsmom
...... I'm just so happy for you.

This is like the night before Christmas for 8? weeks!!!!!
Posted By: middleofnowhere

what a lot of squeaks! I'll find them cuter a week or two from now. I bet Johanna will, too. But oh my, time to get the house in order...
Posted By: Woodreb

Originally Posted by Shilohsmom
What an active group at just 2 weeks of age. They are precious.

I can hardly wait until you get to meet them in person. Are they far away from you? I'm just so happy for you.

They are a little less than an hour from us here in NH - about 35 miles away, but anywhere we go around here you have to go around a lake or mountain, unless you're on the highway.
Posted By: Woodreb

Originally Posted by middleofnowhere
what a lot of squeaks! I'll find them cuter a week or two from now. I bet Johanna will, too. But oh my, time to get the house in order...

We think they're pretty cute already and I'm sure they will only get cuter over the next few weeks.
Posted By: SeanRescueMom

Love the video and the squeals - have you thought about names yet or are you waiting to find out more about their personalities when you meet them?
Posted By: Woodreb

I've thought a little about names, but we want to wait until we meet the pups and find out about personalities before getting too deep into a name decision. The only thing I told DH was that I didn't want another "K" sounding name. Caleb and Ciara - it was getting to where I kept calling one of them the wrong name.

Well, I'm not sure avoiding a "K" sound is going to solve that problem. The last set and the current one have very different from one another names .... & it still goes wrong every once in a while.... What's kinda amusing is that they respond to the correct name & not the incorrect one... I've mistakenly called BTE 2 by BTY 2 and by BTE 1's name. ... phonetically they are not similar names but they all refer to GSDs... But they don't look that much like one another either... You may have hope. You are quite a bit younger than I am!

Regardless of how confused you get on the names, I'm looking forward to more puppy pictures!
Posted By: jarn

(We mix up their names all the time, all three of them - occasionally I'll even say 'Toby! I mean Agis! I mean Neb! Xerxes!')

I cannot wait to see more of your pup though Johanna!
Posted By: Woodreb

Here's the pups at almost 4 weeks old. And yes they are cuter now.

thanks a lot,
Posted By: Shilohsmom

OMG, they are just too cute. It looks like the breeder is doing a wonderful job at getting them off to a great start. I know you must be getting really excited. Hard to believe they are already four weeks old.
Posted By: jarn

I am reminded that the other week, passing a newborn, I remarked to Toby 'Puppies are so much cuter. But then, I'm sure that baby's owners think it is cute'.
Posted By: middleofnowhere

Humans are rather odd looking animals. Their hair usually grows in patches, if it is more widely distributed, it is relatively thin. You'd think our skin would be thicker to compensate. If roles were reversed and dogs and cats (and other domestic animals) selected the human to take home, I wonder what their criteria would be? If they picked us as infants - which wrinkly bald thing would be most sought after?

Yes, puppies are more attractive and that's not just in their infancy. ..
Posted By: jarn

We might all be biased Middle! Or at least you and I!
Posted By: Woodreb

Just talked with the breeder over e-mail. We get to meet the puppies Sept 6th at 10:30.

Originally Posted by Woodreb
Just talked with the breeder over e-mail. We get to meet the puppies Sept 6th at 10:30.

Does that mean we will get to see more pics? I bet you can't wait, only two more days.

Yes, DH will be bringing his camera along for the visit.
Posted By: SeanRescueMom

Originally Posted by Woodreb
DH will be bringing his camera along for the visit.

Have your husband and you decided which little one you will be bringing home soon?
Posted By: Woodreb

We are both kind of drawn to the lightest colored female, but we will be picking when we meet them on Tuesday and get a little feel for their personalities.
Posted By: Shilohsmom

Take lots of pictures. I can hardly wait to see which one you chose.
Posted By: Woodreb

DH ended up taking a couple of longish videos while we met the puppies and talked some with the breeder. I'm still figuring out how to edit the videos and get rid of extraneous stuff. In the meantime here's a few snapshots taken out of one of the videos of the pup we picked. 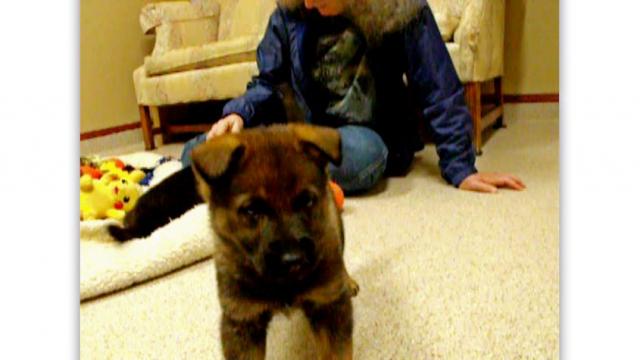 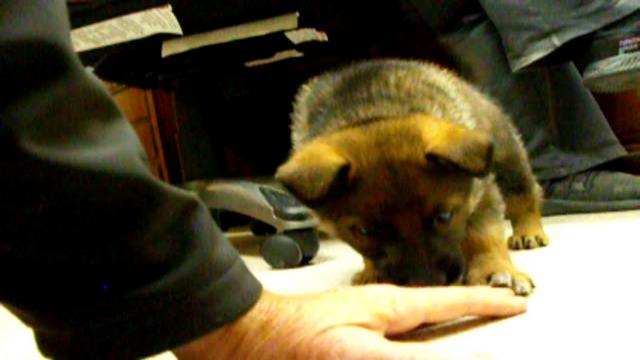 Not the greatest resolution on the tug photo. I cropped out part of the picture and then reduced the size to get it to a size that I could post. I may try a resize of the whole snapshot rather than cropping me out of the picture. 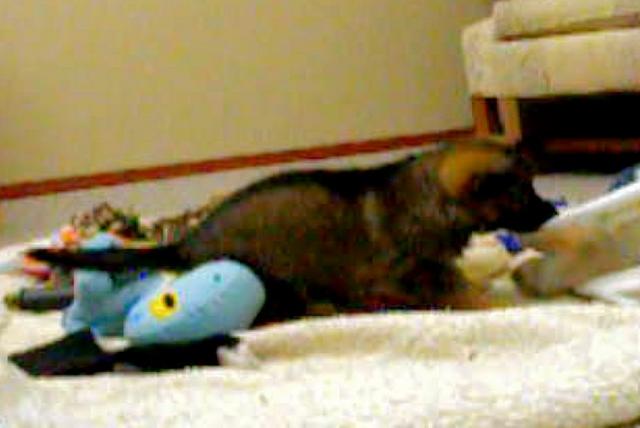 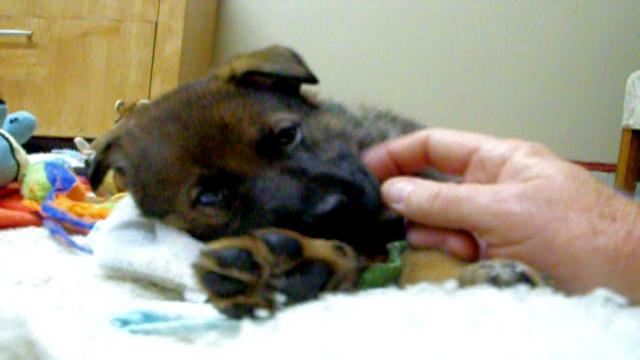 If you look at the breeder's 4 week old video, the pup we chose is the lighter girl with a pronounced stripe on her back. Our grandson Tyler called this a peanut butter skunk stripe on Caleb. All three of them were cute and any one of them would have been fine. This one reminds us a little of Caleb in the coloring/pattern of his sable coat and also reminds us of Aodhán in the red coloring. We haven't decided on a name just yet although I floated one idea with DH that he thought might be OK, but I don't think he's sold on it.

She'll be coming home 3 weeks from today.
Posted By: middleofnowhere

The rough part would be leaving her there, no?

Thanks for sharing the photos - they're happy photos and I am happy to see them.
Posted By: jarn

That's exciting! I am so excited for you. She's beautiful. She looks spunky in the best possible way.
Posted By: SeanRescueMom

Congrats on selecting a beautiful girl who will definitely keep your husband and you on your toes but in a good way. Only three weeks, you can start crossing off the days on the calendar.

Three weeks to name a new spark of joy. What a great time!

I don't know how anyone names a dog-but it's a nice problem.

thanks for the pics
Posted By: Wisc.Tiger_Val

What a pretty little girl.
Posted By: Shilohsmom

Two weeks from today is the day she'll be coming home!

We've already got her kennel set up.

Here's a picture of our girl that the breeder put up on Facebook today. Meet Roisin (pronounced row-sheen), it means "little rose" in Irish. 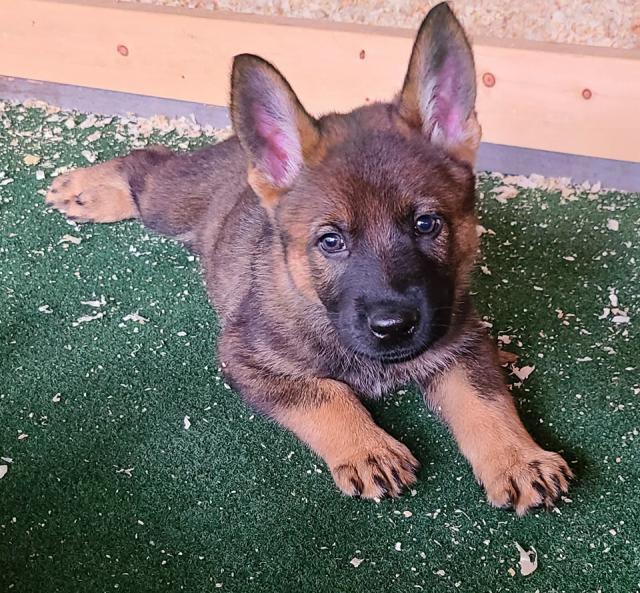 She comes home a week from Tuesday.
Posted By: Mary Jane

Oh she's perfect! Look at Roisin! I love the name, and she's so lovely.
Posted By: middleofnowhere

What a cutie. It will be great fun to watch this little rose bloom and grow! May she be a great big hunk of dog to belie the "little" part of her name.
Posted By: Woodreb

Originally Posted by middleofnowhere
What a cutie. It will be great fun to watch this little rose bloom and grow! May she be a great big hunk of dog to belie the "little" part of her name.

How big of a hunk will depend on how much Daddy's genes play a role. Mom is around 55 - 60 pounds, right at breed standard for a female.
Posted By: Zisso

Oh My Goodness Johanna! Beautiful puppy with a beautiful name!

Sounds like just a few more days and she will be home!
Posted By: Shilohsmom

Roisin is home and I'm trying to be very very quiet so she'll take a nap. She was rather vocal on the ride home until she got herself tired enough to sleep a little. She had some lunch and a little walk outside. I'd forgotten how much an 8 week old puppy wants to try and eat everything (including rocks until she finds she can't chew it).

Bentley (the cat) doesn't quite know what to make of her and she is fascinated by him. They are just about the same size right now. 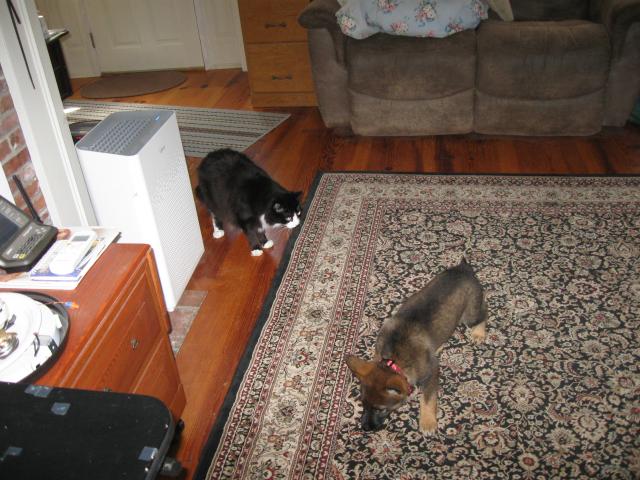 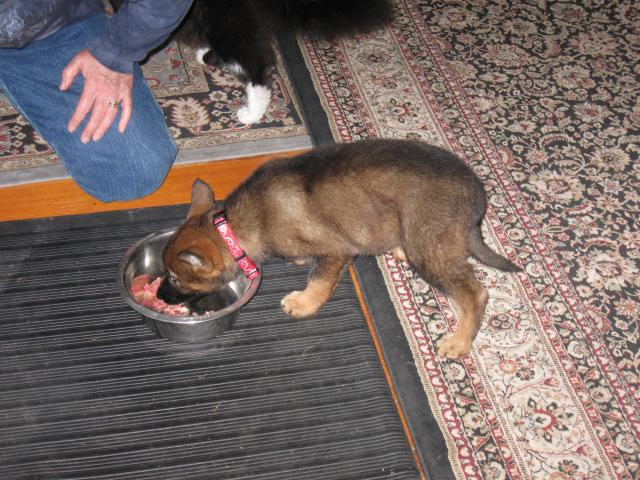 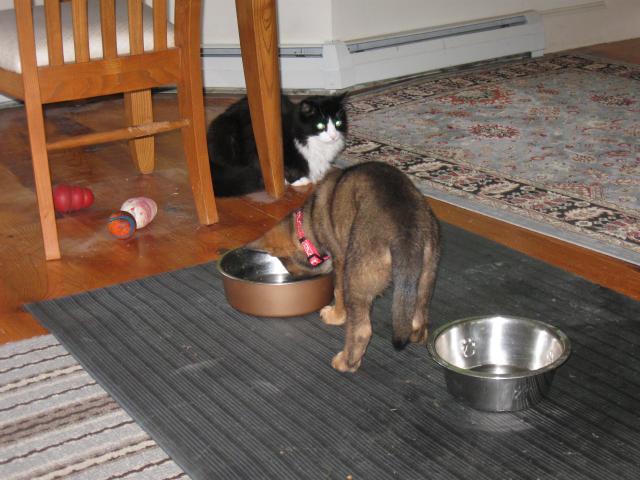 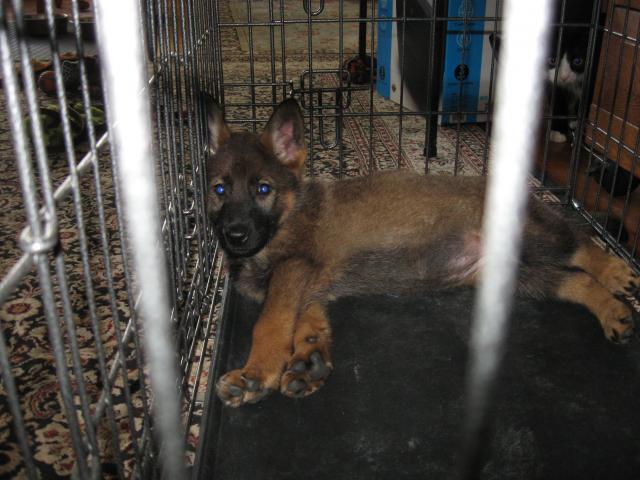 I think it's going to take a couple of days for Ciara to get used to her. She's kind of gotten used to be an only dog and is being a little stand offish right now. She also didn't think too much a a chicken "paw" - although Roisin was happy to have a couple of little pieces. 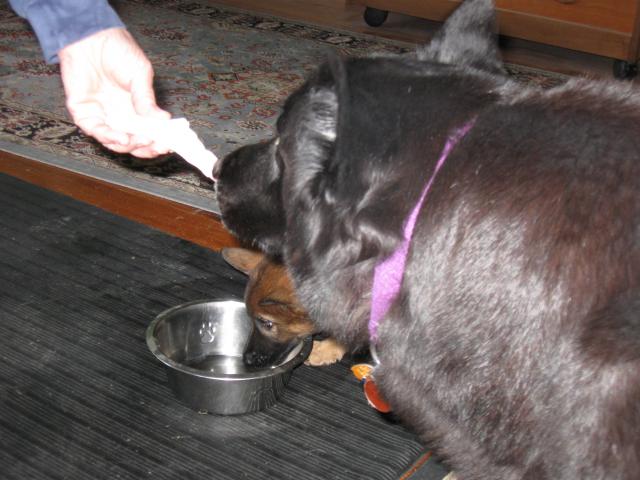 P.S. I saw a cake by your name - happy birthday, Rosa
Posted By: SeanRescueMom

I have a hunch Bentley rules the roost, is that right? Our previous cat wasn't phased at all about Sean when we brought her home. She was full of spunk and at times thought she was a dog too.

I don't know if Bentley rules the roost, but he holds his own against Ciara. When Caleb was still here and the 2 of them ganged up on Bentley he'd high tail it upstairs out of their way. Not that they ever did anything more than chase him - more like a game than wanting to hurt him. And if they seemed to be getting too much in his face, I would call them off.

Roisin wants to play with him since he is fairly close to her size and, of course, Bentley isn't having any of that. He's warned her off with a hiss and smack a couple of times, but her memory is pretty short term. She keeps trying. It's her first experience with a cat - I think she thinks he is some kind of dog.
© 2022 GermanShepherdHome.net